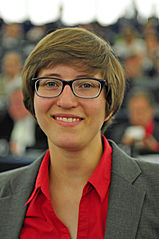 Ms Reda explained how proprietary software has often left regulators in the dark, becoming a liability for (and often a threat to) citizens’ health and well-being.

As an example Ms Red cited the recent Dieselgate scandal, in which motor manufacturers installed software that cheated instruments that measured emissions of pollutants in test environments, only to spew illegal amounts of toxic substances into the air when they were on the road.

Ms Reda also explained how medical devices running proprietary software posed a health hazard for patients, giving the example of a woman with a pacemaker who collapsed while climbing some stairs due to a software bug in her device. Doctors and technicians had no way of diagnosing and correcting
the problem as they did not have access to the code.

A further cause for concern is the threat posed to democracy by software with restrictive licences. The trend of replacing traditional voting ballots with voting machines is especially worrying, because, as these machines are not considered a threat to national security, their software also goes unaudited and cannot be audited in most instances.

Ms Reda remarked that although voting machines are built and programmed by private companies, they are commissioned by public bodies and bought with public money. However, there are no universal EU regulations that force companies, or, indeed, public organisations, to make the source code available to the citizens that have paid for it.

She further noted that, despite free software technologies (web servers, CMSs, email servers, etc.) being used extensively throughout the public sector, the latter assumes very little responsibility in the way of giving back to the community via
patches or bug reports.

Ms Reda commended the Free Software Foundation Europe (FSFE) for
advocating that all software commissioned by public entities and paid with public money, be made available to all under free/libre licences. She also noted that it is essential to get governments to see the merits of free software to get them on side.