Hacktionlab 09 – what should have been written from site, plus a bit more

Steve Woods Bristol Wireless News, National Events, National IT News, Open Source News, Training June 18, 2009 Comments Off on Hacktionlab 09 – what should have been written from site, plus a bit more 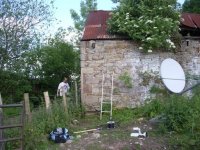 About a week ago I wrote a piece (news passim) when the forward crew for Hacktionlab were about to depart to site, since when a discreet silence has been maintained. A partial excuse for such taciturnity was your scribe’s duties on the woodpile for the event – hard physical graft for someone used to tickling a keyboard for a living.

The forward crew of Mike, John, Amias, Woodsy and Acesabe arrived on site at Highbury Farm on the Wednesday evening, pitched their tents and settled down for the night (eventually) ready for a hard day’s work setting up the site for arrivals due from Thursday: the hard work entailed erecting the big white tent, setting up the network, satellite dish, clearing the barn and establishing a workspace, servicing the site loos and myriad other minor tasks. 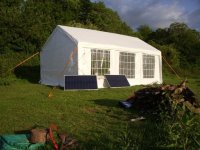 Hacktionlabbers started turning up from the afternoon onwards, the most thought-provoking being the arrival in the early evening of Alan who’d cycled all the way from Sheffield (150 miles away) in 11 hours. The most welcome vehicular appearance on site was Llanos, whose wee blue hatchback made it to within some 100 metres from the barn despite being fully laden with essential supplies – cider and a barrel of beer. 😉 Another welcome arrival was fellow BW volunteer Hamish, fresh from Scotland with a goodie bag of traditional Scottish fare – shortbread, potato scones, oatcakes and Irn Bru – tasty!

Friday saw Hacktionlab proper swing into action with the post-breakfast ritual of introductions and organising the schedule for the day, which set the pattern for the next 3 days. Workshop topics were wide and varied, including Mike’s ever-popular satellite workshop, networking in difficult environments, collaborative working and security tools, privacy, security sessions encryption sessions, multimedia workshops, plus the geeks’ key signing party. Perhaps the most controversial session of the weekend – mainly because its content and purport flew in the face of a lifetime’s conditioning – was round the firepit on Sunday evening, when BW member John gave a taster session on common law rights and their use. 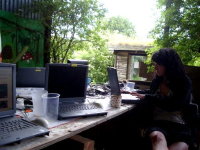 Hacktionlab also gave a showcase for low power and renewable technologies: there was our LTSP on display and in use in the barn, whilst the marquee boasted solar panels powering a 12 volt cinema consisting of a media player, LED projector and sound system, which came into their own once the day’s work was done. 😀

In summary, a worthwhile and enjoyable event in good surroundings and company, made better by the fine weather, plus a larger turnout than last year. In Mike’s words: “We got some very positive actions out of it, got some great people together to get to know each other better, strengthened the UK network for techs and activists, and erm, drank rather a lot of cyder in a lovely rural setting”. An urban Hacktionlab is being thought of later this year, somewhere up North. Details will be posted on the Hacktionlab wiki. For now thanks are due for this event to Mike (general organisation), Amias, John Jane and Becky for keeping us fed, Llanos for vital beer and cider supply, Woodsy for a warm fire in the evenings, Acesabe for tech support (and the photos used in this piece. Ed.) and all workshop organisers/facilitators, not forgetting our hosts at Highbury Farm.