In case you hadn’t heard, last weekend saw the climax of this year’s Climate Camp near Kingsnorth, Kent.

Bristol Wireless was in attendance, providing kit and tech support for the Be The Media centre, including Camp Radio (archive here).

As usual, the event was powered by renewable energy: indeed, as can be seen below, the Bristol Wireless suite of veteran laptops was powered at times by its users, with 5 minutes cycling giving pedallers 10 minutes on the laptop! 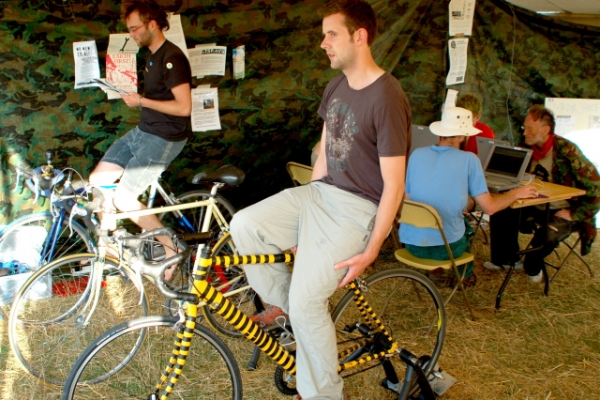 The kit arrived back at the lab on Tuesday. Cunningly accompanied by a plea to help unload the van, Mike wrote the following en route:

survived climate camp, didn’t get arrested, didn’t get got at by the trotskyists, corporate moles, undercovers, socialist workers, nor pinko-greeno-conspiracy theorists! All went very well, the suite and the space performed well as usual, the party tent took a battering though, and I’m pretty knackered. Sam’s windmill worked and helped to save the day power-wise……will be driving back later and hope to get to Werbs around 5ish to drop the stuff off.

Hopefully, we’ll have a fuller report in the next few days. 😉