Women who do tech

Steve Woods Local IT News, National IT News, Open Source News March 24, 2009 Comments Off on Women who do tech

Your scribe discovered yesterday that today has been designated Ada Lovelace Day by Pledgebank and is intended to promote the role of women in technology.

The Pledgebank pledge for Ada Lovelace Day is:

“I will publish a blog post on Tuesday 24th March about a woman in technology whom I admire but only if 1,000 other people will do the same.” 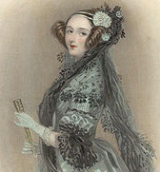 For those who don’t know her, Ada (or Augusta Ada King, Countess of Lovelace) is mainly known for having written a description of Charles Babbage’s early mechanical computer, the analytical engine. She is today appreciated as the “first programmer” since she was writing programs, i.e. manipulating symbols according to rules, for a machine that Babbage had not yet built. This was quite an achievement for a woman in Victorian England and one who only lived to the age of 36.

Well, your scribe feels most reluctant to pick any particular woman: all those I’ve met in the technology field have been exceptional, particularly in a sector in which blokes predominate.

However, those that do come immediately mind include Laura from South Devon, an open source software developer, who for years managed to combine this role with a day job in the voluntary sector. Then there’s Rachel, a very busy web developer and joint organiser of Bristol Dorkbot (cheers for a fine event last weekend Rachel 🙂 ). Another long-standing friend is Ingrid Oesten: I first became aware of her technological bent many years ago when husband Royce told me she was doing a computer science degree. I last heard of her working for Infineon, a job that has taken her all over the world. Finally, there’s Winnie from Bristol University, whose knowledge of the internals of Linux leaves me very humble.

The above paragraph brings home to me that we’re very, very short of women volunteers for Bristol Wireless; if you’d care to join us, please get in touch.