In the Bristol area (and other less favoured parts of the 3rd planet of a lowly star on the end of an unfashionable arm of the galaxy), Bristol Wireless has built up a fair reputation as übergeeks. We’ve also done some work beyond Bristol too.

Building on the latter, Bristol Wireless now wishes to extend the benefits of its work further afield, initially to Western Europe. We are therefore today announcing the progress of the development work we have been doing on our own communications satellite.

“At its hi-tech facility in St Werburghs, BW techs have for some time been building an open source satellite from recycled and donated parts, using the combined skills of its team of volunteers”, said BW spokesperson Avril Fuell. “Coming from a wide range of technological and engineering backgrounds, they have a superb set of skills we have been able to deploy on this project.” 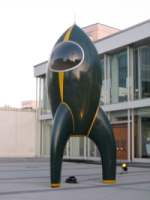 The satellite will of course be running Linux and it is believed a specially modified version of Voyage Linux is being developed for the project and, once in orbit, the satellite’s footprint will cover most of western Europe.

The main obstacle facing the project at present is the lack of a suitable launch vehicle. However, Germany’s Chaos Computer Club has been contacted with a view to borrowing their rocket, as shown in the accompanying picture (which is by courtesy of Andrew Kilpatrick).

“We hope to have our comms satellite launched within the year,” said BW spokesperson Avril Fuell. “The countdown has started and we should have a fully deployed working satellite in geostationary orbit just after midnight on 31st March next year, although this might slip to the following day.” 😉

One Response to Beyond Bristol