If any one is interested in trying out a bit of digital Djing I would highly recommend Mixxx. I stumbled across it a few months ago whilst having a browse through the Synaptic package manager and to be honest with you, I love IT.

It’s quite a simple application to use and the graphical features are spot-on. However, in order to get fully functioning I had to spend a little bit of cash.

In order to beat match and mix with some degree of success you have to be able to listen to one channel whilst the other is playing. For this I had to get a USB external sound card.

After some shopping around online, I found just the thing: Behringer have a nifty USB 2 input and 2 output sound card for £25.00

The Behringer UFO202 is Linux friendly. Just plug it in and it works.

After several spaced-out days messing around with soundscapes and some of my ambient collection, I decided I wanted to up the tempo, frighten the neighbours (maybe making them run for cover 😉 ) and have a go with some trance.

Trying to do everything with a mouse is a bit restrictive, so again I turned to Behringer’s website for some inspiration. After a few minutes I found just the bad boy I was looking for: the Behringer BCD3000 Next Generation DJ Machine – “Play, Mix, Perform and Scratch Your MP3 Files like Vinyl Records. Price: £140” 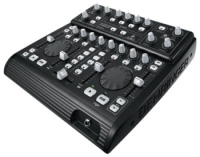 Again once I plugged it in the configuration for Mixxx was a simple mouse click. Just to make sure I hadn’t bought myself a piece of plastic junk I asked one of my mates to come and have a look at it. My mate’s been a successful DJ for over 10 years and held a residency a few years ago at one of the smaller clubs in Ibiza. Within the space of 10 minutes of him having ago he told me plainly that I had ‘a fully functional DJ set up.’

I can’t recommend this set-up enough to anyone thinking of having a go at DJing. Digital mixing is the way forward. I wouldn’t say I’m great at it yet, but thanks to free and open source software I now have the ability and equipment to hopefully take this further in the future.

Effective DJing using free and open source software powered by PCs rescued from the tip. This is my plan. Let’s hope my neighbours remain as enthusiastic about it as I am 🙂