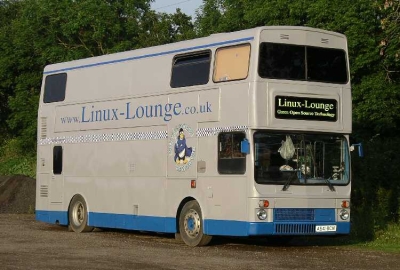 Our old friend John Palfrey has emailed us with an update and picture of his Linux Lounge bus, which is gradually coming together as a showcase for open source IT and green energy technologies.

The bus is a 1984 MCW Mk11 Metrobus, 9.5m in length and is powered by a 10.5L 6 cylinder Gardner engine. From 1984 to 2005 it spent its life in the North-East of England finishing up with “Go North East” as a school bus. It was then retired and converted to a mobile casino. In November 2006 John purchased it for a well-earned semi-retirement in the West Country being converted into an IT centre on the top deck and a servery below.

John writes that he still has a few jobs to do, including an LTSP suite on the top deck. John says:

“I am working with the green energy organization Panacea, who are very excited at the prospect of promoting their stuff on the bus. I will show a video of theirs and some PDF files on the prototype equipment they are working on. Have a look at their site; it is full of green OS energy projects.”

“I don’t have any inside photos of the bus yet as its still a mess due to lack of storage space. I need to book up some events for August onwards. Have a look at the Linux Lounge website and I would appreciate any comments you may have – good or bad.”