Some people may think Twitter trivial (after all, can you say anything meaningful in 140 characters? Ed.), but I find it a great source of news, particularly news I would not otherwise get to hear of, let alone see.

One of these is the recent release of Granola, formerly known as Miserware. 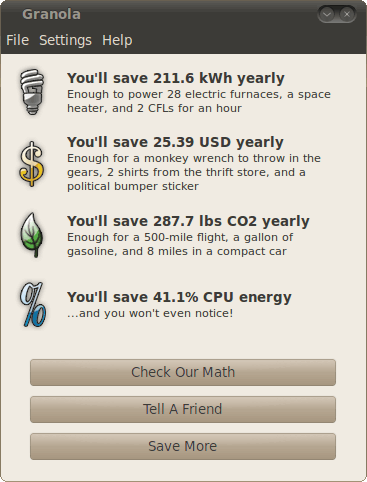 According to its developers, Granola makes computers more energy-efficient without slowing them down. It’s safe, easy to use and allows your computer to operate as efficiently as possible without sacrificing performance when most needed.

Whilst it’s principally targeted at Linux users, there is a version for Windows for those still in the clutches of the evil empire. 🙂