Steve Woods Open Source News June 1, 2011 Comments Off on Allergy warning: may contain traces of GNU
It has long been the habit of purists (don’t you mean pedants? Ed.), such as rms, to correct those who call our favourite operating system Linux by reminding them that it should actually be termed GNU/Linux as it’s actually the GNU operating system with Linus Torvalds‘ Linux kernel.

So, like me, you might have been wondering just how much GNU there actually is in a typical Linux distribution.

This question has now been answered by Pedro Côrte-Real. He’s looked at the number of lines of code to determine the proportion of GNU software in a modern Linux distribution by looking at the software available in the main repository of the Natty Narwhal version (aka 11.04) of Ubuntu, which was released earlier this year.

Pedro’s investigations reveal that just 8% of Ubuntu Natty is comprised of GNU. Other major components include Gnome (5%), kde (8%), Mozilla (6%) and the Linux kernel (9%), as shown by the pie chart below. 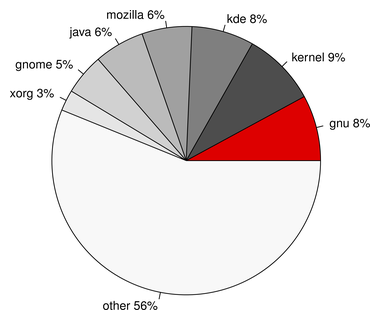 Pedro has also dug out some more interesting facts about where GNU fits into Linux, which you can read in his original post.