For the first time scientists and engineers from an international collaboration led by Bristol University’s Dr Mark Thompson have generated and manipulated photons (i.e. individual particles of light) on a silicon chip – a major step forward in the race to build a quantum computer. 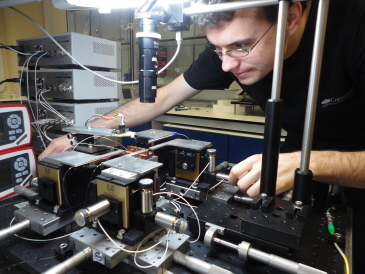 Quantum computers and quantum technologies in general are widely anticipated as the next major technology advance and are poised to replace conventional information and computing devices in applications ranging from ultra-secure communications and high-precision sensing to immensely powerful computers. Quantum computers themselves will probably lead to breakthroughs in the design of new materials and the discovery of new drugs.

Although still in their infancy, quantum technologies are making rapid process and a revolutionary new approach pioneered by Bristol University is exploiting state-of-the-art engineering processes and principles to make leaps and bounds in a field previously dominated by scientists.

Featuring on the front cover of Nature Photonics, this latest advance is one of the important pieces in the jigsaw needed to produce a quantum computer. Whilst previous attempts have required external light sources to generate photons, this new chip integrates components that can generate photons internally.

“We were surprised by how well the integrated sources performed together,” admits Joshua Silverstone, the paper’s lead author. “They produced high-quality identical photons in a reproducible way, confirming that we could one day manufacture a silicon chip with hundreds of similar sources on it, all working together. This could eventually lead to an optical quantum computer capable of performing enormously complex calculations.”

Group leader Mark Thompson explained: “Single-photon detectors, sources and circuits have all been developed separately in silicon but putting them all together and integrating them on a chip is a huge challenge. Our device is the most functionally complex photonic quantum circuit to date, and was fabricated by Toshiba using exactly the same manufacturing techniques used to make conventional electronic devices. We can generate and manipulate quantum entanglement all within a single mm-sized micro-chip.”

The group, which, includes researchers from Toshiba Corporation (Japan), Stanford University (USA), University of Glasgow (UK) and TU Delft (The Netherlands), now plans to integrate the remaining necessary components into a chip and show that large-scale quantum devices using photons are possible.

“Our group has been making steady progress towards a functioning quantum computer over the last five years,” said Thompson. “We hope to have within the next couple of years, photon-based devices complex enough to rival modern computing hardware for highly-specialised tasks.”

However, these are just the first steps. To produce useful quantum machines a new breed of engineers will be required: quantum engineers, individuals capable of understanding the fundamentals of quantum mechanics and applying this knowledge to real world problems.

Bristol’s newly established Centre for Doctoral Training in Quantum Engineering will train a new generation of engineers, scientists and entrepreneurs to harness the power of quantum mechanics and lead the quantum technology revolution. This innovative centre bridges the gaps between physics, engineering, mathematics and computer science, working closely with chemists and biologists while having strong links with industry.

A full copy of the research paper is available from Nature Photonics.