From GNOME to Chrome

Asus have kindly lent Bristol Wireless a ChromeBox for evaluation and I’ve had a chance to put it through its paces. 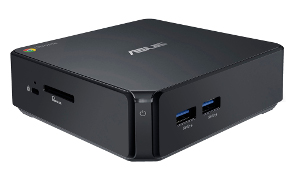 On opening the box I was surprised by its compact form; it’s about the size of a CD case and an inch high. The boot time’s impressive, taking only a few seconds to launch the desktop. This particular model is the CN60 (now renamed M004U. Ed.), an entry level device, there are two others the i3 and the i7. That said this is still a fairly powerful tool, it has a Celeron 1.4 GHz processor and 2 GB of RAM, 16 GB flash hard drive and 100 GB of cloud storage free for one year, after which the space will cost you £5.00/month.

My expectation was that it would be like an Android device, with which it has some similarities, such as the inclusion of the Play Store and all the Google stable of software like Maps, Hangouts, Google Plus as well as all the usual social media and other apps. I installed an RSS reader, Inoreader, that runs in the browser. The video editing software I installed also ran in the browser. Rather than installing and running standalone applications, Chrome is an application platform, although some, such as my IRC client (Circ) and my terminal, do work outside Chrome. In all, the system is more than adequate for media-rich web content. The graphics are great; scrolling through web pages and watching video are seamless. 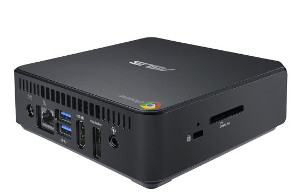 Having spent the last 11 years sat at a client/server-based system (LTSP), I’ve never really been responsible for the maintenance, update and general upkeep of my work environment: that responsibility falls to the sysadmins. On the other hand, the ChromeBox updates itself automatically (the ChromeBox’s sysadmin apparently lives in the cloud!) and I found I could install the applications I needed myself instead of having to rely on anyone else. The settings are simple enough; you choose the way the browser behaves, the toolbar options, the wireless settings and the printer. What more could you need?

At one point I needed a terminal to investigate a minor problem. I found Koding, installed a VMWare (virtual machine) interface, created an account and added some tools I needed. I wondered if this device has the ability to to do more than absorbing web content and found Caret. This is a text editor for coding, so I’d say the ChromeBox potentially has creative abilities too, although these have yet to be tested in full.

Using the ChromeBox involved a shift in mindset that’s taken me a day or two to get used to. This ChromeBox system relies on cloud environments, such as Dropbox. This obviously limits its capabilities when using the machine in rural Somerset where the so-called ‘broadband’ is little more than 1990s modem speeds. In such locations the ChromeBox would be a joy to use with proper broadband.

I spend some of my time visiting businesses fixing a variety of network problems. In one office I came across a ChromeBook in use, so took the opportunity to have a chat about what it’s like using the device professionally, particularly when used with inadequate rural ‘broadband’. This particular user said: “I love it; I can’t fault it”. When working in the project’s cloud environment, the ChromeBook saves the work locally and re-syncs as soon as the network comes back up when the connection goes down.

I’ve since demonstrated the ChromeBox’s functionality to a glass blower whose workshop and shop are miles apart. He wanted a device that would access the stock spreadsheet and invoices to keep his business records in one place. Most importantly, he wanted a simple device with zero maintenance. The ChromeBox has Google Docs, Google Spreadsheet and Google drive with which many businesses are already familiar, so the transition should be simple. It remains to be seen if this device is right for his organisation but he seems confident it’ll do the job.

To sum up, I think the ChromeBox is just the job for a home entertainment centre, with a fast, rock solid internet connection you’d be hard pushed to find a better device for personal/family use, although it could also prove useful for voluntary/community projects or even a small business.