Help the GNOME Foundation defend the GNOME trademark against Groupon!

The GNOME Foundation is a non-profit organisation promoting the goals of the GNOME Project, helping it to create a free software computing platform for the general public that is designed to be elegant, efficient and easy to use. 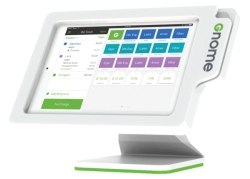 The Foundation is currently facing a threat to its GNOME trademark from global deal-of-the-day website merchants Groupon, who have recently announced a product that’s also called Gnome. Groupon’s Gnome comes in the form of a tablet-based point-of-sale “operating system for merchants to run their entire operation.” It therefore has little to do with creating an elegant, efficient, easy to use free software platform for the general public, but more with liberating cash from the wallets and purses of the general public. The Groupon offering is shown on the left.

As a result of this threat from Groupon, the GNOME Foundation has released the following statement and appeal for funds.

Recently Groupon announced a product with the same product name as GNOME. Groupon’s product is a tablet based point of sale “operating system for merchants to run their entire operation.” The GNOME community was shocked that Groupon would use our mark for a product so closely related to the GNOME desktop and technology. It was almost inconceivable to us that Groupon, with over $2.5 billion in annual revenue, a full legal team and a huge engineering staff would not have heard of the GNOME project, found our trademark registration using a casual search, or even found our website, but we nevertheless got in touch with them and asked them to pick another name. Not only did Groupon refuse, but it has now filed even more trademark applications (the full list of applications they filed can be found here, here and here). To use the GNOME name for a proprietary software product that is antithetical to the fundamental ideas of the GNOME community, the free software community and the GNU project is outrageous. Please help us fight this huge company as they try to trade on our goodwill and hard earned reputation.

We want to show that our brand matters and that you care. Of the 28 trademark applications Groupon filed, we have to file formal proceedings to oppose 10 of them by December 3, 2014. Help us raise the funds to fight back and most of all call public attention to this terrible behavior by Groupon. Help us make sure that when people hear about GNOME software they learn about freedom and not proprietary software. Our counsel has advised us that we will need $80,000 to oppose the registration of the first set of 10 applications. If we are able to defend the mark without spending this amount, we will use the remaining funds to bolster and improve GNOME. Please help us raise the money to protect GNOME’s trademark and strengthen Free Software!