These days the free online encyclopaedia is the world’s seventh most popular website and now includes more than 38 million articles in 289 languages, all maintained by an army of volunteer editors and contributors.

Andy Mabbett, one of that army of editors and contributors, has been musing on Twitter as to how Wikipedia will react having reached this chronological milestone. 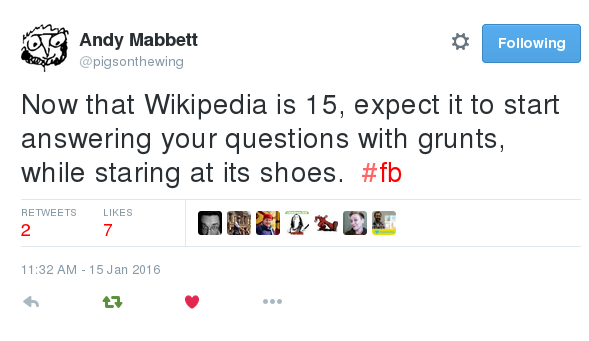 Over the last 15 years, although the project was originally initiated by Anglophone geeks, Wikipedia has been working to increase the diversity of its content and contributors through outreach programmes such as edit-a-thons at universities and museums and by trying to appoint more women administrators. However, there is still plenty of work to be done in this field.

The Wikipedia website and the open source Mediawiki software it runs on are managed by the Wikimedia Foundation charity, which is funded by donations, the vast majority of them from small donors.

To mark Wikipedia’s 15th birthday the Foundation has created an endowment fund that it hopes will raise $100 mn. over the next 10 years.

Happy birthday, Wikipedia – and may you enjoy many, many more.