The first study, on broadband quality, concludes that subscribers are getting 75% of advertised download speeds. The second study, on prices, shows that broadband access has continued to become more affordable, whilst the third report, on broadband coverage, confirms substantial deployments of high speed fixed as well as 4G (LTE) mobile infrastructures.

This study covers all EU Member States, plus Iceland and Norway. It shows that on average, EU fixed broadband customers are only getting 75% of the advertised download speed, the same as they were getting in 2013. The difference between advertised and real speeds remains constant in spite of investment in broadband networks, which raised the average actual download speed significantly from 30 Mbps in 2013 to 38 Mbps in 2014. However, download speeds throughout the EU are higher than in the United States. By way of example, xDSL services averaged 8.27Mbps in Europe and 7.67Mbps in the US. 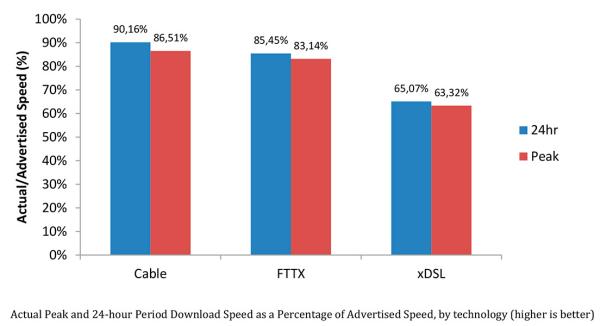 The EU is asking operators to be more transparent and giving users more rights through its new rules for a Telecoms Single Market, the text of which will be formally adopted by the European Parliament next Tuesday.

The key findings of the second study on broadband retail prices are as follows:

The third study – on broadband coverage – found that, excluding satellite, over 216 mn. EU households (99.4%) had access to at least one fixed or a mobile broadband technology at the end of 2014. High speed mobile broadband (4G based on LTE) coverage went up from 59.1% in 2013 to 79.4% in 2014. Next Generation Access (NGA) technologies capable of delivering at least 30Mbps were available to 68.1% of households up from 61.9% a year ago. The map below illustrates NGA deployment at regional level.