As part of the strategy to create a single European digital market, the European Commission is preparing to invest €120 mn. to promote access to wireless connectivity in public places under the heading of Wifi4EU.

According to Le Monde Informatique, this could see up to 6,000 publicly accessible wifi access points deployed, whilst the Commission’s factsheet (PDF) reveals that the upper limit for deployments is 8,000 and the hardware provided will enable 40-50 million connections per day. 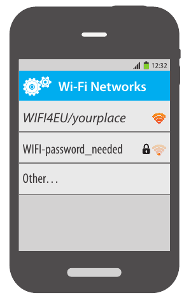 Wifi4EU access points aim to benefit both EU citizens and visitors to the Member States.

Other beneficiaries will include public administrations, hospitals, libraries and other bodies
with a public mission. The EU will fund the equipment and installation costs with vouchers, whilst public bodies will be responsible for paying the monthly subscription costs and keep the equipment in good order. These bodies will be able take advantage of the access points to develop and promote their own new digital services, such as e-government, e-health or e-tourism.

Local communities will need to show that they commit to providing very high speed internet via Wifi4EU and show under state aid rules that they are not competing with a similar, existing private or public wifi provision since the initiative will help cover areas which otherwise would not offer such connectivity.

Furthermore, these free wifi hotspots are not the only levers of the Commission’s plan to increase the number of Europeans connected to the internet. In its project to reform telecommunications regulations, it is also planning to make high speed internet access a universal service obligation for telecommunications providers. It will be up to the governments of the Member States to ensure that people on low incomes or with special needs can access these services, perhaps by offering vouchers to cover the cost or requiring providers to give them a special rate.

The Wifi4EU scheme is intended to run until 2019.

The European Commission’s office in London has been approached asking whether public bodies in the UK will be eligible to apply for this scheme in the wake of all the uncertainty following the UK’s advisory vote to leave the EU in the recent referendum. Any response will be published when it is received.

Update:The following reply to our queries about Wifi4EU and the definition of what constitutes a “public mission” has been received.

This initiative is a proposal for legislation, which has to go through the EU decision-making process before any funding/projects can be launched. It is not possible to say how long the process will take to formally adopt this initiative. As long as the UK remains a Member State of the EU eligibility to participate in EU programmes should remain possible.

The full text of the proposal can be found here: https://ec.europa.eu/digital-single-market/en/news/proposed-regulation-promotion-internet-connectivity-local-communities-and-public-spaces-wifi4eu

The proposal does not specifically define “public mission” , but the preamble states:

Support of this kind should encourage entities with a public mission such as public authorities and providers of public services to offer free local wireless connectivity as an ancillary service to their public mission….