The strangest occurrences could affect the running of networks. For instance, part of Bristol Wireless’ own network was once knocked out of action by a squirrel trying to store nuts for the winter inside a piece of our hardware.

However, it’s not just small operators like ourselves that run this risk as big boys Virgin found out this week in Shropshire. 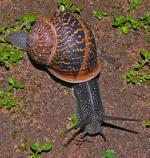 An invasion of snails caused a fire in a Virgin Media broadband cabinet in Baldwin Webb Avenue in the Donnington area of Telford, yesterday’s Shropshire Star reports.

A small number of snails found their way into the cabinet’s battery where they were electrocuted and caused a small fire with smoke issuing from the cabinet. The latter prompted passers-by to call the local fire brigade who attended from Wellington Fire Station at about 12.33 p.m. on Wednesday and left the scene about half an hour later.

A number of homes in the area were reported to be experiencing problems with internet access and TV services on the same afternoon, but these are now believed to have been resolved.