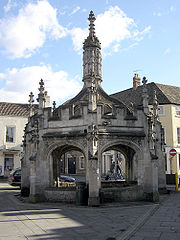 Whenever your correspondent visits Malmesbury in Wiltshire, it has an unhurried air. This is in spite of some past events that happened very quickly but added to its history, such as Eilmer, the local 11th century monk at the local abbey who made an early yet unsuccessful attempt at a gliding flight using wings, or the slightly later (18th century) Hannah Twynnoy, reputedly the first person killed in Britain by a tiger.

However, life in the slow lane is not always appreciated by Malmesbury residents. This is borne out by the Wilts & Gloucestershire Standard which has reported that members of Malmesbury Town Council are less than impressed with BT’s deployment of ‘superfast’ broadband in the town.

BT initially announced that Malmesbury would be getting ‘superfast’ broadband by 2015. However, its deployment has been subject to a number of false starts which deferred the deadline to spring 2017.

Deeming the good burgers of Malmesbury had not suffered enough, the deadline has now been postponed again to autumn this year, i.e. nearly 2 years after the town was promised it would have acceptable connection speeds.

On hearing this latest news, Malmesbury Town Council passed a resolution to write BT to express its unhappiness with the continued delays and and seek assurances that BT would now actually stick to its revised timetable.

The latest council minutes reveal the deliberations as follows:

Councillor Grant explained that there had been numerous delays by Open Reach [sic] in providing fast broadband to the centre of Malmesbury, the latest date now being given as autumn 2017. Councillors Gundry and Budgen explained that fast broadband was available within some areas of the town but not in the central commercial area. It was proposed by Councillor Grant, seconded and RESOLVED that the Town Mayor write to the operational manager and managing director seeking a firm deadline and expressing concern at the numerous delays.

The Wilts & Gloucestershire Standard’s report quotes Councillor Gavin Grant, who describes the situation as “unacceptable” and goes on to say: “This has an implication, not only for people’s enjoyment, but also the businesses that are trying to operate in the internet age. Fast broadband is fundamental. It puts the centre of Malmesbury as a commercial destination at a disadvantage.”

A unnamed BT spokesperson is reported as saying that the company “remains committed to making superfast broadband available in Malmesbury”, but offers no explanation for the series of delays.